Velvet snarled, almost as if something had 'snapped', and dodged to the side quickly. She growled deep in her throat, and lunged for the other fox. She attempted to bite her neck-Not in a place that would be fatal, but it would certainly hurt-And hopefully get the fox out. Velvet was not going to give in. This was her den, with memories that would make her a different fox if lost. She did not care if the other fox had cubs, and it was her territory. Velvet was going to guard it with her life.
Your neighbourhood moderator.
Feel free to PM me if you have any questions or just want to chat. c:

Amber yelped but wouldn't give up. She tackled Velvet and attempted to pin her down, if sucsessfull, she would bite in a place fatal and keep biting down there till the fox gave up, or died.Stone and Shine were starving at this point and they began to try to hunt on their own. Shine stalked down and saw a Rabbit taking berries. Shine stalked down, and pounced apon it and it squealed and scratched shine but she wouldn't give up. Shine bit deeply into the rabbits neck, and Stone joined in, and aventualy the feasted, hunted, but soon mother did not return. Shine looked at Stone and he turned around and barked a Goodbye, and left. Shine saw tears streaming in her eyes, but he was right. Mother was not returning, and she decided to leave and never return, she already knew how to hunt and she saw bears fishing before. So shine followed stone and went on to find a territory that would support the two of them.

, she already knew how to hunt and she saw bears fishing before.

(Remember this is not set in North America, it is set in the UK.. And here in Britain, as yes, I am British, the top predator is a red fox.)

Velvet winced in pain as she felt blood trickle down her throat, but leaped up, out of the other fox's grasp, before it would kill her. Velvet lept for the vixen, snarling in rage, aiming for it's stomach.

(Trying to make Velvet as mortal as possible without her dying... XD I'll only let her die off when she has cubs.)
Your neighbourhood moderator.
Feel free to PM me if you have any questions or just want to chat. c:

(Okay, Sorry foxes. Also, can your run if this attack hits? Thank you.)

Amber yelped as the fangs hit her stompach, but she didn't give up and attempted to bite at her ears, and if sucsessfull would tear it and aim somewhere fatal and attempt to hit. Amber saw her two cubs leave her territory, but she allowed them too. They could eat grass, but Amber decided not to get into their buisniess, as it wasn't her responsiblity.

(Alright, but knowing Velvet, well, she never forgives and never forgets. So Amber better be on her guard... >:3)

Velvet yelped as the fox bit her ears, and she decided that was all-For now. She swore to come back. Velvet whined, pretending to be defeated, and scrambled out of the burrow and trotted off.
Your neighbourhood moderator.
Feel free to PM me if you have any questions or just want to chat. c:

Amber decided to have more cubs, and her cubs were gone. She set off into her territory. She saw small fox prints and followed them, leading to a young male fox. He was young and downright perfect, baby blue eyes, nicely groomed fur, and his tail flicked, as if he didn't care. The male was ready to mate, as it was mating season. The male let out a short, single bark and padded over and showed affection to Amber. Amber played with the male, and after a while of playing and showing affection, the male aventualy became Amber's mate. Amber heard a human once yell "Here, Flash!" too the fox, but he didn't come. Amber went over to under a tree, and the male wanted to mate and amber mated with the male. Amber became pregnant, and the male went out to hunt. He looked at the burrow in her territory, and buried it. Amber dug another den near a rabbit den and a small puddle. Flash drank from the puddle and went into the burrow, and slept snuggled up and warm next to Amber. 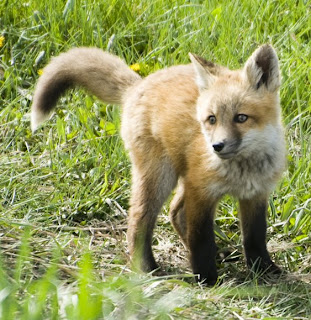 Personality: Kind and loving to her family, though around strangers, she may seem mean, but this is just because she is scared, and is trying to 'defend' herself.
History: Nothing much?
Mother: Amber
Father: N/A
Other:
Last edited by hoopyscoop on Wed May 01, 2013 8:40 pm, edited 2 times in total.
Icon = Fluttershy = not mine.
Top

(Me,Hoopy, I can be Cottons mom. My fox is already pregnant anyway)

WolfPawPrints wrote:(Me,Hoopy, I can be Cottons mom. My fox is already pregnant anyway)

(Thanks, I'll lower her age down to newborn. But, I don't know if I'm accepted yet.)
Icon = Fluttershy = not mine.
Top

(Accepted! Too cute!)
On my 3DS, editing the post later
Your neighbourhood moderator.
Feel free to PM me if you have any questions or just want to chat. c:

Amber yawned one morning, discovering her mates was gone. She didn't care, really, as long as she was pregnant. Amber padded over to her nest, and fell asleep. Waking up she gave birth (I'm NOT getting into the details o-o) and cleaned her pup.

Amber yawned and she knew she couldn't give meat to a newborn, so it was up to her cub, Cotton, to find milk. She soon realized that she was hungry and decided to go out to hunt. She saw a rabbit crawl out of its den, and munch on some grass, and she pounced on it. The rabbit got away quickly, and amber decided to scavenge, and ate a carcass of a half-eaten mouse. She soon returned to the den, and nudged her cub and dropped a piece of meat in front of her to see if she could eat meat this early, but she didn't think amber could eat it.

Cotton sniffed the piece of meat that was in front of her, she licked it, and thought it didn't taste that good, then she proceeded to crawl to her mom, of course her legs weren't strong enough to hold her, as she was just born, so she could not walk or see her mother. So she stopped trying to walk, and started whining.
Icon = Fluttershy = not mine.
Top
Post Reply
59 posts