You can choose to be many creatures of Africa. Be it predator or prey, canine or feline, young or old. One thing comes into matter though. That single thing is: Who will rule. All animals of the pride lands want to rule. Lions are most suited for the job, but others disagree. Maybe lions, hyenas, cheetahs... Even meerkats. But, the road to leading over the land is not easy.
~~~~~~~~~~~~~~~~~~~~~~~~~~~~~~~
Current Leader:

Name: Shenzi
Gender: Female
Age: 2
Rank: Omega
Looks: Shenzi is grey, rather than normal spotted hyenas. She has yellow eyes and a black mane that goes until the end of her neck. Shenzi has darker eye spots and a lighter underbelly.
Personality: Shenzi is a not-very-noble hyena who will often betray her allies for her own good. She can be quite rude and doesn't have a very good sense of humor.
Race: Spotted Hyena
Mate: None
Crush: None
Family: None
Last edited by W0lfeyez on Sat Apr 06, 2013 7:04 pm, edited 2 times in total.

Name:Imani
Gender: Female
Age: 13
Rank: Alpha F
Looks: She is an inverted hyena, dark grey with white spots, one white spot that's actually over her left eye.
Personality: Scarred because her parents died, she will be mean. Sometimes she will be happy if something good happens that mostly helps her survive.
Race: Spotted Hyena
Mate: None
Crush: None
Family: All Lost, All gone, All dead.

(So is it free to roleplay? Imma roleplay now and ignore it if i am not supposed to be roleplaying right now.)

Imani yawned. She was lying under a large tree, waiting for a carcass or at least some prey to show up. Imani growled softly and barked lazily. She dragged herself up and looked through out the pride lands for something to eat. Imani looked at a patch of grass that moved. She stalked it and grabbed onto it with her large teeth and dragged it into a bush, and it was a hare. "Yay.." she growled angrily. Imani stuffed her muzzle into the hare and began to eat.
Last edited by WildLife on Wed Apr 03, 2013 12:28 pm, edited 1 time in total.

Name: Chick
Gender: Male
Age: 5 Years
Rank: Beta
Looks: Chick appears as the average hyena, no uniqueness, no abnormal features. Just...a hyena. Most of his difference is in his sounds and behaviors.
Personality: At 5 years of age, his life is partially over. Having gained many wisdom's of both the land and social hierarchy in the life of a hyena. He's not that spunky little dude or the guy who thinks he's all big and bad. No, Chick likes to just keep to himself for the most part, although you will find him socializing with the others, only if he's approached. Independent could explain his personality, having learned to rely on no one but himself after several years roaming the edges of the Masi mari and picking off scraps as a young adult. This hyena has been known for his coldness and lack of trust to nearly anyone, nor would he hesitate to show hostility to anyone causing danger or annoyance to him.
Race: Spotted Hyena
Mate: None
Crush: None
Family: None

Name: Koborid
Gender: Male
Age: 3 1/2 years
Rank: Beta Male
Looks: Koborid is a blotchy mess of browns, blacks, and reds with the strict limitation of white (with the occasional browns and blacks) on all arms, the end of his tail, and a splotchy spot on the scruff of his neck. He carries a somewhat faster, lean build about him that makes him one of the first to capture prey although mostly lacks the strongest of jaws to do the best damage (unless he catches small prey, of course) except for being more likely to push or pull them from their balance and pin them to the ground using his weight.
(I can't get the direct link to this picture but this is basically what I wanted http://toonphoto.photoshelter.com/galle ... tAcK1lVfCU )
Personality: Koborid carries himself around as a very laid back but socialable animal. He works to do his job to the best of his abilities and he's simply a male that wants to make things right for everyone. He always works between hunting and caring for the young when need be and can easily go from following orders to becoming quite the leader with the stomp of a paw. To his pack he is a very friendly companion, almost like a fair, courageous guardian for his family.
Race: African Wild Dog
Mate: None
Crush: None (although most likely the beta female)
Family: None 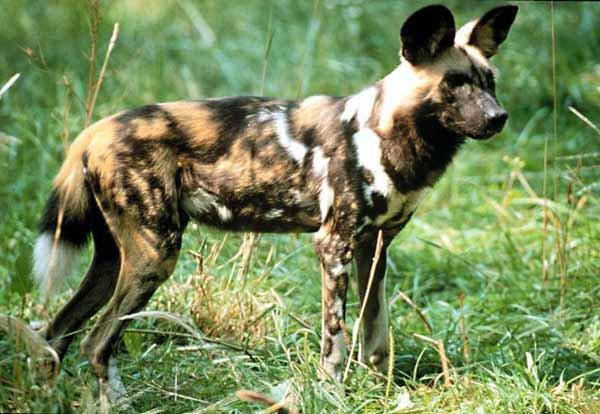 (I don’t take any copyright for this picture.)
Personality: Emerald is very caring, and fun-loving, but serious when needed. She sometimes acts younger than she is.
Race: African wild dog.
Mate: None
Crush: None
Family: None
Icon = Fluttershy = not mine.
Top


Shenzi trotted out of her den and yawned loudly. She sniffed at a small stream and took a short drink before letting out a loud howl and sniffing the air for predators that would kill her. She grunted and smelt an antelope carcass. She sprinted over to the meaty, mouthwatering taste of it and grinned happily.

Emerald walked through her pack’s territory, she stayed away from other pack members. She wanted to be alone, she laid underneath the shade of a tree and sighed, she silently dozed off.

(W0lfeyez, you listed my character(Emerald) as a beta female, I put Omega in my form, this is okay, because I would be happy to take a higher rank. Just letting you know.)
Icon = Fluttershy = not mine.
Top

Imani growled. She was getting thirsty quite quickly, so Imani decided to see where Shenzi is. Imani got up and wandered off too the African wild dogs territory. She saw no real reason to be in the territory, but she decided to come, drink water if found, come out. Yes, this is what Imani decided. Imani saw a puddle and drank from it quickly, and ran as quickly as she could off of the territory.

Shenzi smelt a hyena nearby and sprinted over to it, grinning. She saw that they were near African wild dog land and nervously howled.

A very rare occasion indeed as Koborid lowered his stance, stalking after something he never believe he'd ever be able to see in his lifetime. It was a young, small-horned impala; injured, motherless, confused. He drank in the scene displayed befor him, the Sun high above casting the small mammal a golden flash of flank ahead of him. He thought not once on the emotional side of the scene, it being entirely replaced by the thought of food for his pack. Warily did he take another look, unbelieving that this thing would be out there without a mother. The air smelled fresh, lacking the signs of a herd being nearby this little guy. It was alone and frightened by the world around it; if only it knew. Without another thought to cause even more hesitation, a leap ensued his rippling muscles underneath multicolored fur as he took the opportunity gracefully; maw parted wide with paws out in desperate reach, a squeal heard from the deathly afraid prey as it sprung to life from its lying position. Koborid's paws met and retaliated against flesh on the back of the kid, mouth unable to reach as he found it hard to grab it when the thing made a sudden run for it. It was like catching water, the slippery thing. Determination surged over with adrenaline as he swiftly picked up speed, friction finding it hard to stop him as he darted after the wild impala. Its hind right leg seemed to bounce lazily in pain, a wildly deep gash leaving it forever disgruntled and impaired. No matter the cost, this thing managed to hop wildly for the basic hope of life while its predator chased it, only lagging behind for a small amount of time before the male took the opportunity to leap. It was then that the young impala pivoted itself and attempted to make an incredibly smart way to lose the one looking for a meal as he was so into running straight. The young prey failed ultimately in that it lacked the good knowledge of predictions and distances as Koborid clawed heavily at its already damaged leg just as it turned, causing it to squeal and tumble to the ground, obvious pain from its squinting eyes. It was breathing so quickly, so hard, terrified. It was all he needed to take advantage and end the chase right there, an already good portion of a meal to start the day with. He readily lifted its body just enough off the ground to drag it back to his home, an almost egotistical look showing brightly on his face. The walk wasn't too bad for him. Tiring for sure but as soon as he arrived others took opportunity to help his carriage. He was lucky to have patrolled and heard its call for its mother with his rounded ears. He couldn't help but to take a light glance at Emerald, a small wag of the tail before respecting her moment of isolation and refocusing his eyes on the food.
(Someone please slap my hand.
tl;dr: Found a young impala without a mother or herd, makes it lunch. Looks at Emerald, because reasons.)

Shenzi smelt a dead impala in the distance and grinned. She trotted after the scent of it and found the carcass shortly. Shenzi dug her head into it and splattered gore everywhere as she noisily ate. Hopefully nothing would try to steal this meal away from her. She licked her lips and howled loudly before digging her face back into it and eating another huge mouthful.

Imani growled lightly and scented Shenzi. Imani decided to find her once more, and followed the scent trail leading to a dead impala and then saw Shenzi. Imani hoped not to be noticed, and began to eat.

Shenzi eyed Imali and backed up, allowing the alpha to have the meal. She nervously looked at her and took small bites, hopeful not to annoy the alpha. She was so hungry and knew that the alpha ate most.